If you’re looking for an efficient solution for respiratory illnesses, the medical nebuliser may be what you need. This still relatively unknown aerosol therapy device is used, notably, for the treatment of asthma. It helps breathing. From its composition to how it works and how to use it, let us tell you everything about the nebuliser.

What is a medical nebuliser?

The nebuliser (also called a mister) finds its origin in the Latin word ‘’nebula’’, meaning ‘’cloud’’. It’s a medical device which works by nebulisation. Nebulisation involves transforming a mixture, in this case a medicinal one, into an aerosol. 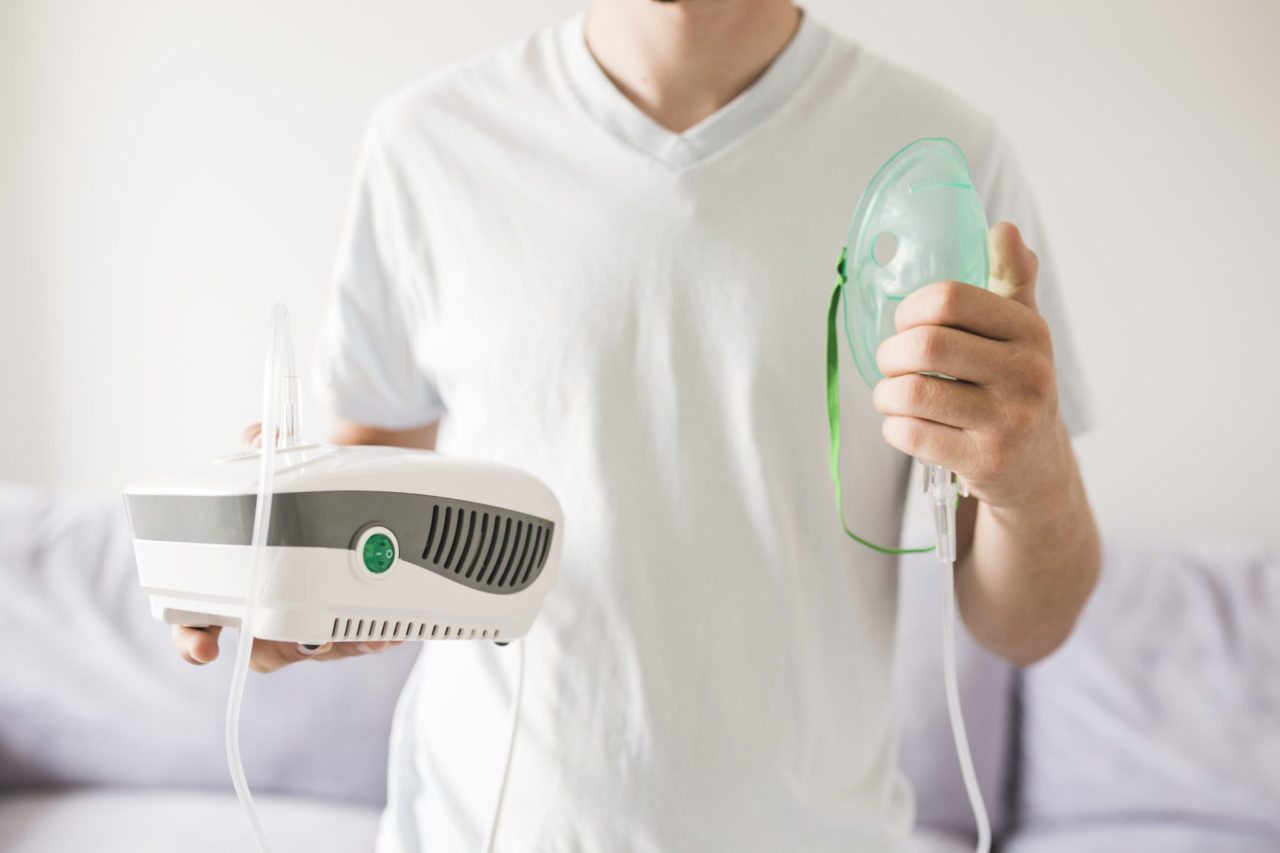 The medicinal mixture could correspond to an antibiotic (treatment of infections), a painkiller (for treating pain), a corticoid, a bronchodilator (treatment of respiratory obstructions), a mucolytic (treatment of abnormal secretions), a viscolytic or various other products such as sodium cromoglicate, for example.

As a reminder, an aerosol is a stable suspension of minuscule particles in a gaseous mixture.

The nebuliser is used through the nose or mouth and sends the particles of the medicine in question directly into the bronchi, the lungs or the Eustachian tubes.

What is the purpose of a nebuliser?

In the medical field, the nebuliser is mainly used to treat respiratory, lung and ENT issues. It is often prescribed in the event of conditions linked, directly or indirectly, to the nose, the throat, the ears, the bronchi or the lungs.

The nebuliser can be used on babies, children and adults.

What is the nebuliser made up of?

A medical nebuliser is made up of different parts: 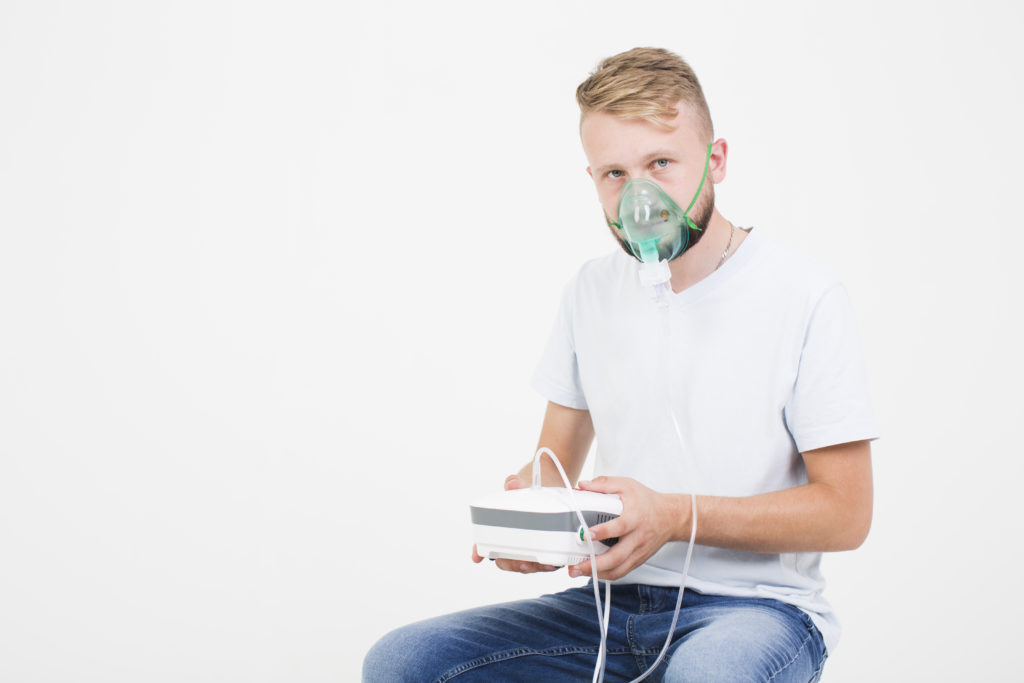 The compressor works to push the air into the spray chamber, in which the medicine is converted into an aerosol. The aerosol is then inhaled using the mask or mouthpiece.

What sicknesses can be treated with a nebuliser?

The nebuliser can treat various health problems. It is mainly used for respiratory, lung and ENT issues. 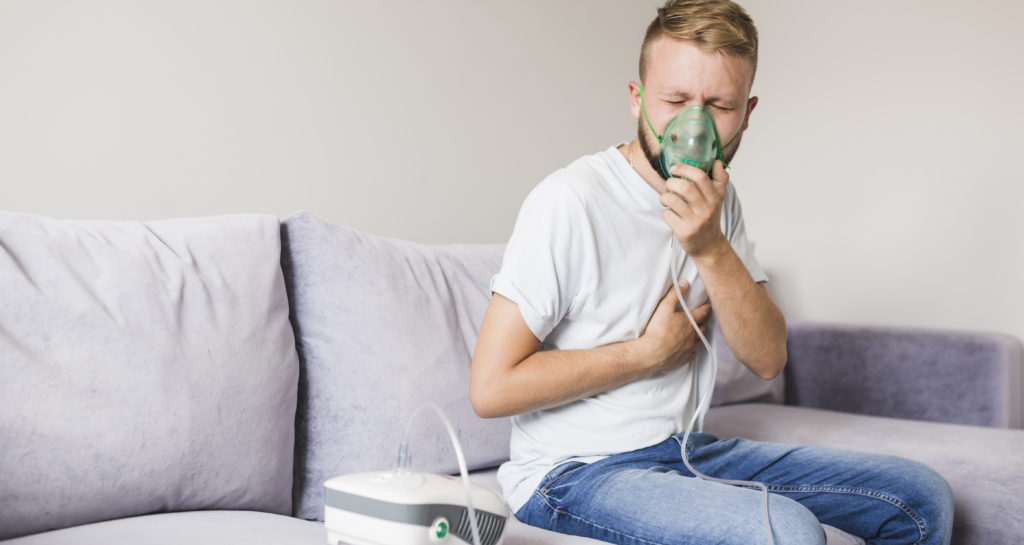 Use of a nebuliser on a person suffering from asthma

However, not all nebulisers are capable of treating the same ailments. The conditions most frequently treated with a nebuliser are bronchitis, bronchiolitis, asthma, laryngitis, sinusitis, rhinosinusitis, allergic rhinosinusitis and emphysema.

What are the different types of nebulisers?

Not all nebulisers work the same and are therefore not prescribed for the same conditions. There are currently three main types of nebulisers:

The pneumatic nebuliser, resulting from the oldest nebulisation technique, works mainly thanks to a gas source. The gas source must therefore be connected to the nebuliser. For home use, the latter is transmitted by the compressor. In healthcare facilities, it can be oxygen or air intake. The pneumatic nebuliser is the most commonly used model.

The vibrating screen nebuliser: the latter also uses vibrations to operate. The domed and perforated sieve vibrates when in contact with the liquid, which allows it to nebulise. This type of nebuliser has been designed to be compatible with even the most fragile molecules.

It should be noted that even within these nebulisers, there exists several different options.

For example, pneumatic nebulisers can have a constant flow or variable flow, such as double venturi or economiser valves. Likewise, some nebulisers are portable nowadays. Such models are more practical as they can be transported in all circumstances.

How does the nebuliser work?

To efficiently use a nebuliser, certain rules must be followed.

Before use, it is of course important to wash your hands and to check the device’s cleanliness, as well as how appropriate the mechanism is for the condition being treated.

In any case, it is important to rigorously follow your doctor’s instructions. They will indicate to you the quantity and duration of the daily sessions, the time of treatment and the type of module to use.

First of all, the medicine should be poured into the device, in the place provided for this purpose. You must then attach the nozzle and the pumping tube, before turning on the compressor.

Once the nebuliser is correctly placed, sit or stand while holding the device horizontally (note that there are now some models of nebulisers suitable for children and babies that work even in a lying position). Then carefully place the mask on your face, at the nose and mouth. If you are using a mouthpiece, it should be positioned in the mouth, between the teeth, with tight lips. When the nebuliser is properly positioned, you can inhale deeply, breathing in and out calmly.

More info on nebulisation in this video.

What is the difference between an inhaler and a nebuliser?

An inhaler is characterised as a device for medical use that allows the absorption of medicinal substances through the respiratory tract. The nebuliser can therefore be called an inhaler if we take its strictest definition.

However, the nebuliser is not just any type of inhaler. It is a very specific model. Indeed, unlike other inhalation methods, the nebuliser is a device appreciated for its ease of use and accessibility. It is true that the latter does not require any coordination or respiratory gestures, and is effective even when breathing at a normal rate.

Likewise, what we commonly refer to as an inhaler is usually a small portable device made of plastic and metal. The latter works mainly by pressing a button that releases fixed doses.

The nebuliser, on the other hand, is more often a larger device, in which you pour the medicine yourself, and which uses air, oxygen or vibrations to convert it into a kind of mist to be inhaled by the nose or through the mouth, i.e. an aerosol.

What are the advantages and disadvantages of a nebuliser?

As mentioned previously, the nebuliser has the advantage of being easy to use and accessible to a wide variety of patient profiles. In fact, the latter can be used by adults as well as by children or even babies since all that is necessary is to breathe, even at low flow. Different medicines can also be mixed together with a nebuliser.

Likewise, it should be noted that the nebuliser is a particularly effective device. Indeed, it administers a drug, in high concentration, directly on the anatomical area to be treated. By precisely targeting the diseased organ, the nebuliser offers very good results. Studies in the field also show that the use of a nebuliser makes it possible to observe greater clinical effects than taking oral medication at a similar dose.

In addition to promoting local action, the nebuliser reduces the risk of possible systemic side effects.

Of course, the nebuliser also has a few drawbacks, but these are mainly practical in nature. First of all, many nebulisers are quite heavy and bulky, which makes them tricky to transport. Likewise, a nebuliser must be maintained by applying very specific hygiene rules to avoid contamination. The duration of treatment with a nebuliser is also often quite long.

In what setting should I use a baby nebuliser? 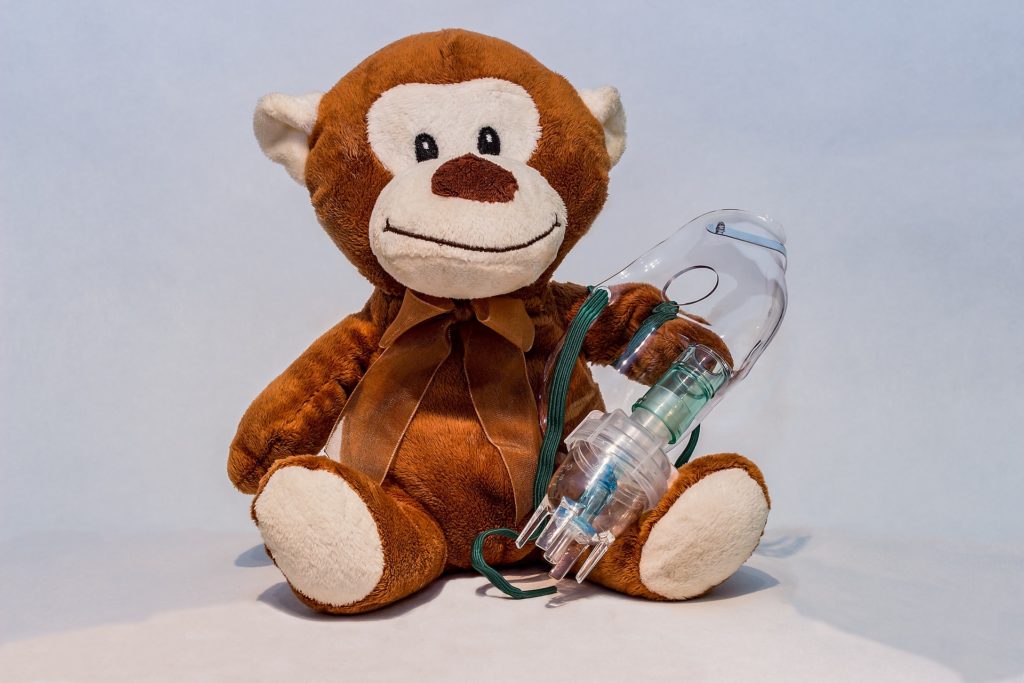 It can also be used in babies in much lighter cases such as colds, bronchitis or bronchiolitis. The nebuliser is particularly convenient to use for small children since it does not require any specific action on their part.

How is the nebuliser cleaned?

It is very important to clean the nebuliser after each use. An unclean nebuliser can become a hub for microbes.

Cleaning your nebuliser isn’t complicated. If there is any medicine left on the inside, it must be disposed of, as it cannot be reused. Then dismantle the pieces and clean each one of them carefully with hot water and washing up liquid.

At least once a day, it is also recommended to disinfect the nebuliser. To do this, take all the pieces apart and place them in boiling water for around 15 minutes. If you are short on time, it is also possible to occasionally use alcohol or any other disinfectant while washing them with water.

The nebuliser kit should be replaced at regular intervals. When doing this, please follow the brand’s recommendations. These are usually written on the instructions of use. In general, this procedure should be carried out approximately every three months.

Note that there are some disposable nebulisers. These have a specific symbol on their packaging. Of course, it is therefore not necessary to clean them since they are intended to be thrown away after use.

Which nebuliser should I choose?

Comparison of the best nebulisers

Among the selection of nebulisers available on the market, it is not always easy to find the one that best suits your needs. To help you find the best product, we have selected three models of nebuliser for you.

The OMRON C28P is a nebuliser suitable for adults and children. It treats ailments related to the lower respiratory tract. Ideal for frequent, quick use, it is perfect for people suffering from asthma, for example.

One advantage of the OMRON C28P is that it’s solid. Especially designed for regular use, it comes in the form of a robust breathing apparatus. Thanks to its high nebulisation rate, it also offers a short inhalation time. It is therefore possible to use it quickly on a daily basis. Easy to use and fully waterproof, it also has a single on/off button.

The only downside is that the OMRON C28P nebuliser remains relatively bulky and somewhat noisy (60 decibels for 1 metre). It can only be used with an electrical socket. This device is therefore recommended more for daily home use than as a portable device.

The OMRON MicroAIR U100 is a portable, ultra-compact pocket nebuliser. It is suitable for adults, children or babies alike. It can be used in all positions. It benefits from a particularly powerful and fast vibrating sieve technology.

The advantage of the OMRON MicroAIR U100 is undoubtedly its practicality. Small, light, silent (around 20 dB, ideal if you are looking for a noise-free nebuliser) and well-designed, it is very easy to use in all circumstances. Likewise, it can be assembled and disassembled quickly. Since it can even be used in a lying position, this portable nebuliser is ideal for very young children as well as for the elderly or sick. Thanks to its sieve technology, it releases a large amount of medicine into the lungs.

The OMRON MicroAIR U100 nebulizer has few disadvantages, apart from its build which is probably more fragile than a conventional compressor nebuliser. Thus, it will be necessary to be careful not to break it, and to take great care of it on a daily basis.

The OMRON DuoBaby is designed specifically for babies. Versatile, this device is at the same time a nebuliser and a baby nose device. It thus allows the child to blow their nose while giving them medicine. The OMRON DuoBaby therefore helps reduce blocked noses, reduces the risk of infections and cares for the upper and lower airways.

The two-in-one build of the OMRON DuoBaby is extremely practical in everyday life. It gives the possibility of treating the background as well as the bothersome symptoms at the same time. Easy to use and fully washable, this device is clearly worth considering for young parents. Very efficient, it sucks up nasal secretions in a single gesture, and directly treats affected areas.

The only small flaw you might find in the OMRON DuoBaby nebuliser is its size. Indeed, this device necessarily takes up a little more space than a conventional baby nose in a toiletry bag. It is therefore necessary to find an appointed place for it, and to make arrangements to transport it.